"We wanted it to be irreverent, cheeky, sometimes challenging but always in a humorous way – make people smile – essentially ‘unboring’ them" - Edinburgh’s Whitespace 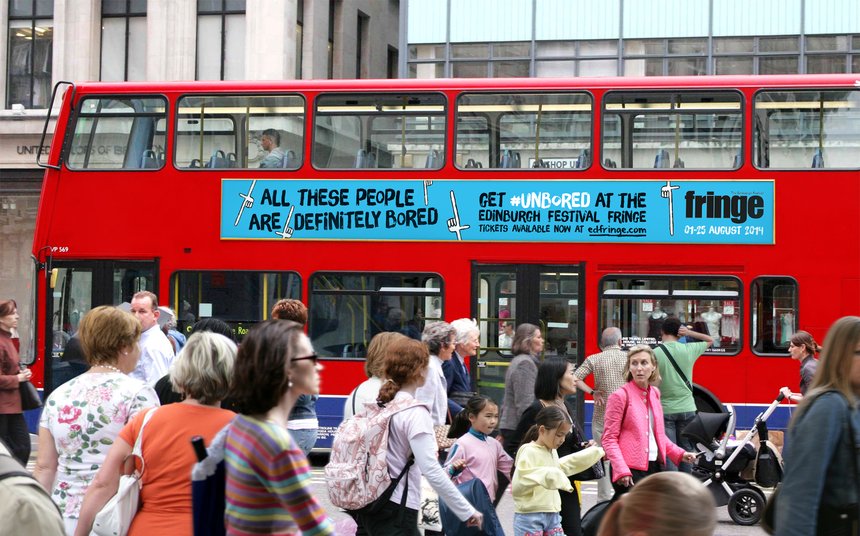 Edinburgh’s Whitespace are one of Scotland’s leading creative agencies. Their long-standing relationship with the Edinburgh Festival Fringe Society resulted in a striking and energetic #unboring identity for the 2014 Edinburgh Festival Fringe. We spoke to Neil Walker – Senior Creative, Mike Bryant – Senior Designer and Carolyn Gordon – Senior Account Manager, about the creation of this vibrant work.

This is the sixth year we’ve worked with the Fringe Society. It’s all year round engagement, selling tickets online from January. So we have to have the creative from then.

This year it’s also the Glasgow Commonwealth Games, World Cup, Ryder Cup and Scottish Referendum. That was part of the brief, the cut-through we needed to consider. It’s a challenge to get something that stands out and that looks different each year.

The core target audiences are Edinburgh, London and Glasgow. Glasgow’s only 45 minutes away but it can be a challenge to encourage people to travel through. Apart from Neil.

At the early meetings, given everything that was happening in Scotland, we were all agreed that we wanted it to be a little irreverent, maverick even – in keeping with where the Fringe began and to give it real cut through. The previous campaigns have taken a very different approach – professional illustration, bold photography, 3D animation – they’ve been neater and a little slicker. But the festival itself is very eclectic and at times unpredictable, even manic; you never know what you’re going to see.

You walk into a pub and there might be a guy playing the harpsichord with his bellybutton (5 stars) or one of the biggest comedians in the country – it can push your mind a little bit. So we had these ideas of really out-there stuff. We wanted to instill the vibrant, irreverent essence of the Fringe and motivate people to escape the hum-drum norm. That’s where the Unbored thing comes from.

That was the pitch: there are over 3000 shows, the Edinburgh Festival Fringe is most definitely unboring. 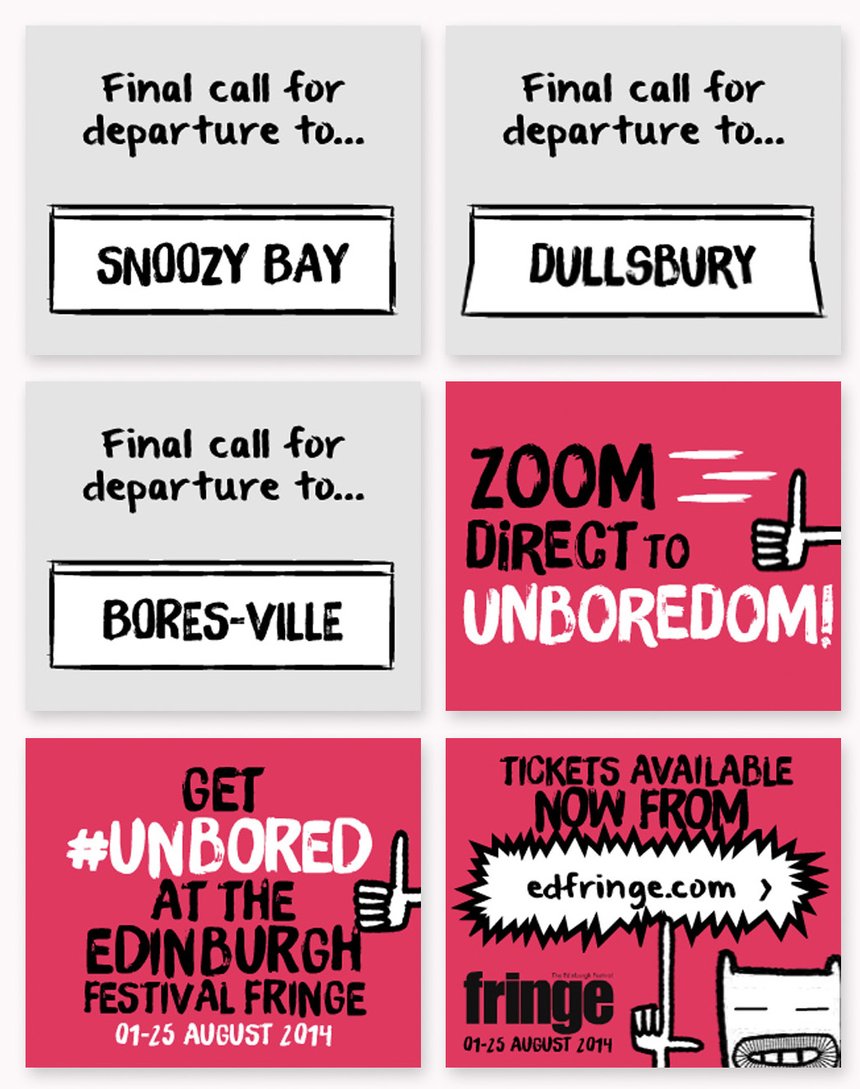 It started off quite anarchic, and initially when it was scribbles and sketches we were pushing it really far, too far to be honest. But there’s that line of acceptability and taste that we were continually exploring from both sides – and ultimately some themes were on the wrong side.

The stuff you can do that gets cut-through and people speaking is better for your budget. Like making unique messages to each space / media. Our philosophy when we approach any brief is – how can we communicate this message other than the usual, more traditional means and media? 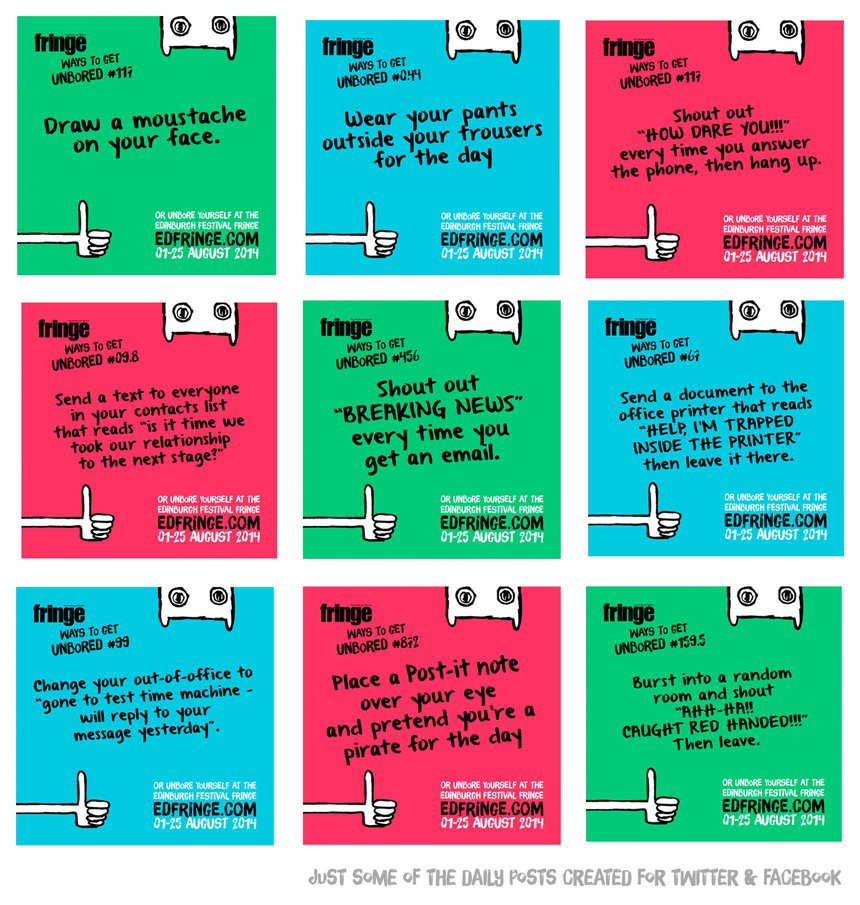 We are not to call this a character. It’s just a dude: no gender. A mechanic to aid for the creative. Something a bit cheeky to add to the personality. We’ve done characters before, and we wanted to move away from that, so we didn’t give it a name. It used to have pants and nipples but we showed the client and quickly found out that that wasn’t going to fly which, was probably right.

The adaptability was the strength, and made it fun to play with. They use the hand outside the ticket office, we used it for comedy, and theatre. And we even got foam fingers made! But there’s a limit as to how long you can get a foam finger made. There’s the EU ruling about foam finger length. After a certain length it becomes a hazard to people’s eyesight…*jokes*

The tone of voicewas the toughest to crack. It needed edge but not too much edge; we wanted it to be irreverent, cheeky, sometimes challenging but always in a humorous way – make people smile – essentially ‘unboring’ them. We have a document somewhere with the words that didn’t run… But the feedback’s been great – we really didn’t need to go down a shocking or invasive route – the concept of unboring works itself!

We got some good emails going back and forth on this production “can you make the bacon strips quiver more”...”why does the watch have a mouth?” – we took surrealism very seriously at all times.

The Edinburgh Festival Fringe means something different to everyone; it’s an eclectic mass full of energy. We always want to get new people to come and discover it. We want to bring in new audiences and well as inspiring the existing. 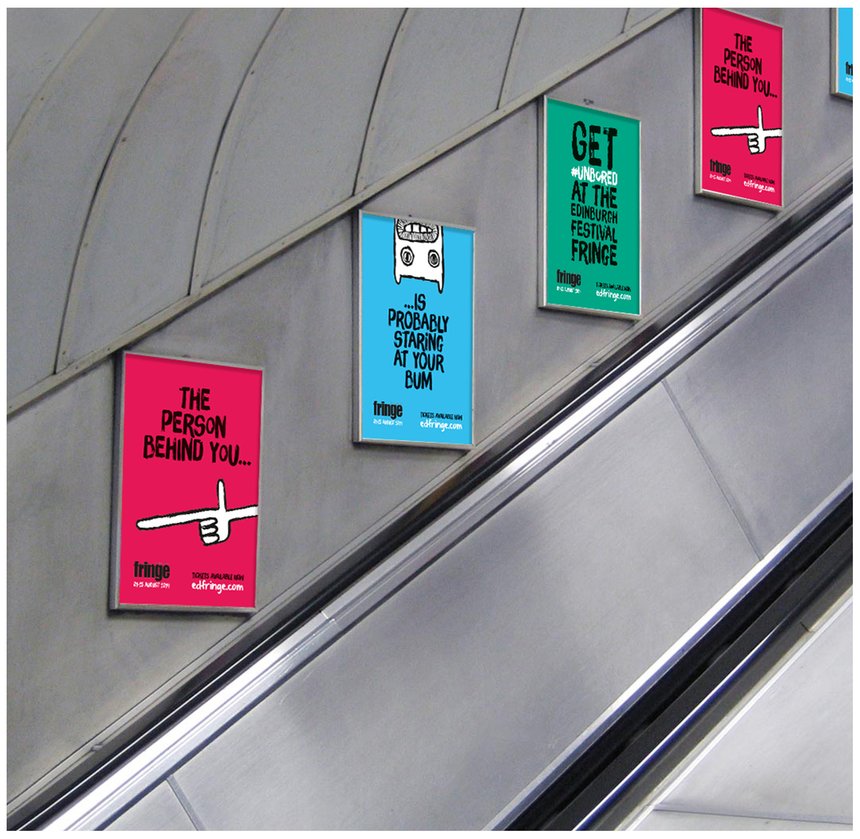 This was the creative for the electronic signs on the London underground. The client signed it off, it was going live. But the London Underground has fairly strict controls and it turned out we couldn’t use the word ‘bum’ so we had a serious email going “right, the words bottom, back side, badonkadonk, buttocks, posterior…are any of those allowed?”. In the end we agreed on ‘backside’ and that was accepted!

There’s been no other complaints that we’ve heard of…