British consumer spending confidence has hit its highest level on record but a huge rise in concern about the economy saw it overtake terrorism and immigration as the nation’s biggest concern.

The latest Nielsen Global Survey of Consumer Confidence and Spending Intentions revealed that across 2016, the economy saw the biggest rise in the amount of Britons citing it as their 1st or 2nd biggest concern. The proportion doing so rose 12 percentage points to 28%. Political stability saw the next biggest rise, jumping eight points to 10% – five times higher than at the end of 2015. 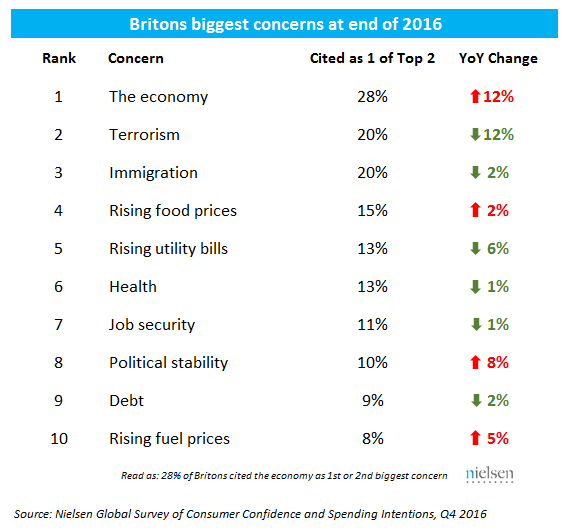 Britons slightly more confident than a year ago

Overall, the British Consumer Confidence Index finished 2016 at 102 – one point higher than a year earlier – much higher than the European average of 81. Britain was Europe’s fourth most confident country (behind Denmark, the Czech Republic and Switzerland), compared to second a year ago.

Across Britain, all consumer sentiments relating to personal finances, spending intentions and cutting costs were more positive at the end of 2016 than the beginning, except job prospects. Indeed, the proportion of Britons positive about making purchases finished 2016 at his highest level on record (53%). 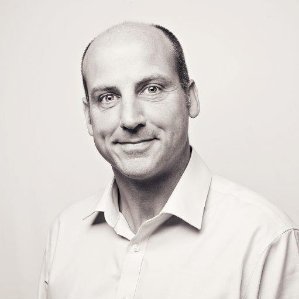 “As the political and economic planning for Brexit gets underway, concerns about jobs leaving the UK have unsettled consumers, as did the US election,” said Steve Smith, managing director, Nielsen U.K. and Ireland. “However, times generally remain good for British consumers, with strong employment and wage growth that rose slightly ahead of price inflation during the last year. In addition, disposable income remains stable, while tax benefits for the lower paid and a rise in the minimum wage have reduced income inequality. As a result, consumer spend continued to be the engine of UK GDP growth in 2016.”

The proportion of Britons who’ve switched to cheaper grocery brands to save money – an activity often regarded as a barometer of consumer sentiment and behaviour – finished 2016 at its second-lowest level on record (22%).

However, Smith is cautious as to whether this downward trajectory will continue, "In the last quarter, we’ve seen the first signs of rising inflation in the UK. Rising petrol prices being a primary example, seeing the third biggest jump in consumer concern. We now expect to see the start of price increases for consumer staples early this year and maybe cases of ‘shrinkflation’ as the industry looks to minimise the price increases being passed on to shoppers.”


Global confidence levels
A Consumer Confidence Index score over 100 indicates degrees of optimism, below 100, degrees of pessimism. The global Consumer Confidence Index stands one point below Britain at 101 – four points higher than at the end of 2015. India (136) has the highest score globally, South Korea the lowest (43).
The scores are derived from Nielsen’s study, established in 2005, which measures attitudes each quarter on topics including personal finances and job prospects among 30,000+ internet consumers in 63 countries.


To view historical trends for all countries, broken down by metrics such as financial concerns and job prospects, visit the interactive Nielsen Global Consumer Confidence Trend Tracker.