There’s a distinctly contrasting nature to the fastest-growing grocery products of the year as fresh fruit and ‘free-from’ led the way, alongside spirits and sparkling wine.

Shoppers in the UK spent £176.4 million more on fresh fruit this year than they did last year, according to Nielsen's annual analysis of till sales at supermarkets and convenience stores, while sales of spirits rose £152.3 million and those of free-from products, such as items without gluten or dairy, rose £146.6 million.

Shoppers also splashed out an extra £80.3 million on sparkling wine, while bottled water and ale & stout – which became a bigger market than instant coffee – also featured in a contrasting top 10 in terms of healthy eating and drinking. 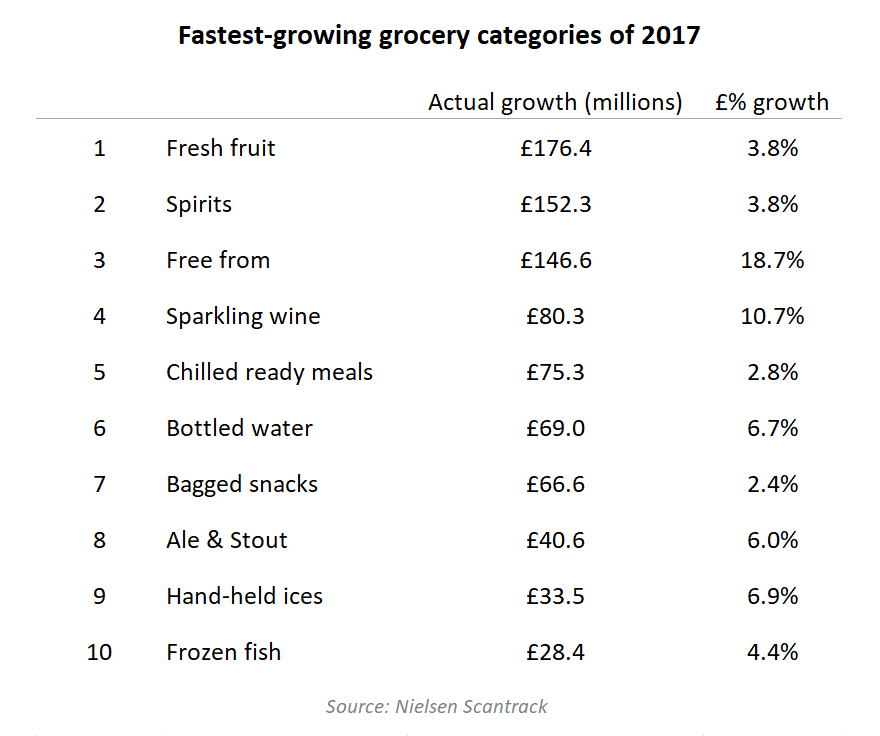 “Supermarkets have done a good job at protecting shoppers from the brunt of rising costs, however, it’s still been an anxious year for households about their grocery bills,” says Ian Mansley, Nielsen’s head of grocery analytics.

“Despite rising prices, shoppers still want to treat themselves with good quality and healthier food but also indulging and enjoying oneself by drinking and dining more at home, particularly if households look to cut costs by not going out as much.”

Mansley points out that the increasing popularity of “big nights in” is also illustrated by chilled ready meals being the fifth fastest-growing sector “off the back of the rise in premium private label offerings and the likes of posh chilled brand Charlie Bigham’s.”

He says the uncertain and turbulent year has also impacted grocery shopping habits in other ways as illustrated by the “growth of challenger brands such as Fever Tree and Brewdog which shows consumers want something different and exciting that meets their changing tastes and lifestyle.”

However, the fastest-growing product of the year was a more traditional brand – Budweiser, upon which shoppers splurged an extra £49.2 million this year, ahead of energy drink Monster (up £31.3 million) and avocados (up £29.8 million).

Adam Leyland, editor of The Grocer, who analysed Nielsen’s data, says: “Bud had a storming year, benefiting from some supermarkets reducing their range of its mainstream competitor beers to accommodate more craft versions. But Bud’s limited edition cans flew off the shelves, not least through its Prohibition Brew, which has made a very credible play in the growing 0% alcohol beer market.”

When it comes to avocados, Leyland says, “Brits can’t get enough of them, particularly the middle classes, for whom its superfood qualities – high in fibre, oleic acid, potassium, vitamin E and magnesium – make it an ideal staple in salads, on sandwiches and even in protein-packed smoothies. Also, scientists have recently developed a stone-free version, making them not only more convenient but safer too, as accident & emergency departments have seen a significant increase in accidental stabbings.”

On shopping trends for 2018, Mansley says that shoppers will “continue to economise but not compromise, as they still want good quality food and drink but expect good value for money. Product manufacturers that deliver against these expectations will be the ones flying high.”